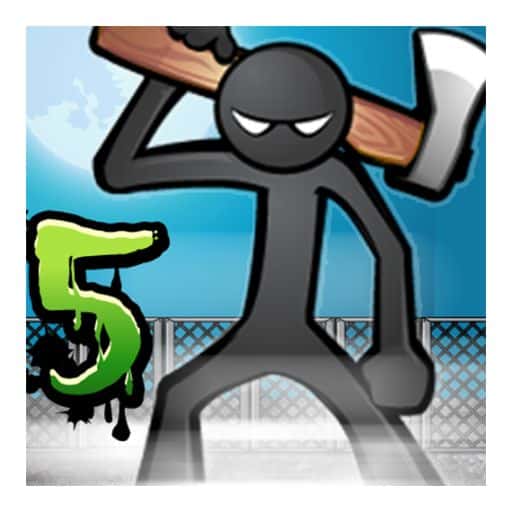 Hey there, from here, you can download Anger of Stick 5 MOD APK and get unlimited money. Anger of Stick 5 : Zombie is an action game offered by COWON. It has more than a hundred million downloads on the Play Store. Dive into a stickman world and stop the enemies who are experimenting on the innocent people using a stickman with lots of weapons.

Overview of Anger of Stick 5

Anger of Stick 5 MOD is a side-view stickman action game. You will play as a stickman and fight against many enemies as well as zombies. You have to rescue the civilians and kill the enemies in a level. Also, you can use various attack combos using the buttons and shoot down the enemies using weapons. In a level, you can get upto 3 stars. One star for killing 70% enemies, second star for rescuing the civilians and third for completing the level under the given time. Enemies will also attack the civilians. You can use medicine to recover his HP. Take him to the helipad for a successful rescue. You will get gold & EXP for killing the enemies. EXP is required to increase your level. On leveling up, your HP and Power increases.

All the controls are under your thumbs and easy to learn in the Anger of Stick 5 hack APK. It has a left & right arrow on the bottom left corner to move your character. And four buttons on the bottom right side of the screen to jump, punch, kick and interact with objects, doors & machine guns. You can use punch, kick & jump buttons in various sequences to perform combos. In the bottom middle of the screen, it has two buttons to use the skill and change the weapon. When you use a weapon, punch & kick buttons are replaced by a new button. Drag this button to fire the weapon in any direction.

There are many game modes in the anger stick 5 mod apk which are as follows:

In this mode, you will face normal enemies. There will be no zombies. Enemies will use martial arts, guns, swords, machine guns and more dangerous weapons at higher levels. In it, you will also go through the story of the game and defeat the enemy boss to stop them from experimenting on the people. Rescue the captured people and kill all the enemies to complete the level.

In the zombie mode, you will fight against the zombies. It’s more dangerous than the main mode. If they cut you, you will be infected. If you don’t use antidote, you will turn into a zombie after a limited period of time and that will be game over.

In this mode of Anger of Stick 5 Zombie MOD APK, the stage will scroll down. If you fall down or are unable to stay at the screen level, then game over. Fight against the enemies and keep jumping on higher platforms.

It’s an endless mode and perfect for earning gold. There will be a flag and two machine guns in the middle of the stage. Machine guns’ ammos are unlimited. Enemies will come from both sides to destroy it. You have to defend the flag as long as possible.

Anger of Stick 5 Zombie MOD APK Unlimited Everything includes unlimited coins & gems. You can spend as many gems and coins as you want in the shop and buy anything you want. You will never run out of them.

You can download the latest version of this MOD by using the Anger of Stick 5 Zombie MOD APK Download button given in this post. Just tap that button, and you will get the direct download link that will start downloading the game.