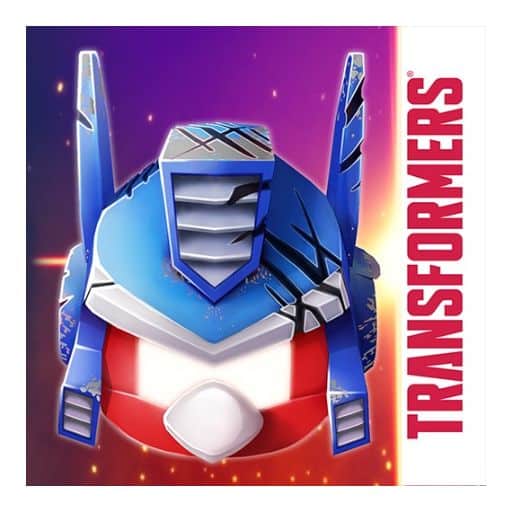 Hey there, from here, you can download Angry Birds Transformers Mod APK which has unlimited money. Angry Birds Transformers is an arcade game offered by Rovio Entertainment Corporation. It has more than fifty million downloads on the Play Store. Dive into a new world of angry birds in the transformer modes, defeat the eggbots, their boss the EggSpark and save the eggs as well as piggies.

The angry birds and the piggies were living happily on their islands. But one day, EggSpark destroyed their happy lives. He took all the eggs and turned them into robots known as Eggbots. He, then, targeted the piggy island with the army of eggmans and started destroying it too. Now the angry birds and piggies join forces to defeat the EggSpark and you are gonna help them too in Angry Birds Transformers MOD APK Latest Version.

Angry Birds Transformers MOD is a side-scrolling game. The angry birds & piggies are transformers in this game. You will see the island and many locations on the island captured by the eggbots. You have to clear all the locations to free the island from the EggSpark. Autobirds are predefined for each location. You can also use another autobird to clear any location but it will require gems.

In a level, your autobird will run automatically forward. There will be bad piggies inside the structures made of ice, stone, wood etc. Tap on the enemies or any part of the structure to shoot your weapon and deal damage to them. You can also turn your autobird into vehicles to evade the falling buildings. The length of the level is predefined. Kill as many enemies as you till the end of the level. Shooting is not one-sided. Your autobird also has an HP bar and the enemies will shoot at you too.

When you lose all the HP, your autobird will be destroyed and need repairing. Until you repair them, you can’t use them in the level. Repairing also requires coins and time. On destroying the structures and enemies, you will get coins. You will also collect coins from the locations over time after you free them from the eggbots.

Angry birds and piggies are now not your enemies anymore in the Angry Birds Transformers hack. There is no good or bad in them anymore. Against the EggSpark, both joined the forces to defeat him & his bots. So there are 112 characters in this game including both the forces. Red, Chuck, Blues, Terence, Hal, Mighty Eagle, King Pig, Minion Pig, Foreman Pig, Chef Pig, Corporal Pig etc. All the characters are available in the transformer mode. They can turn into cars, trucks, planes etc.

Each character has a unique attack. Red as Optimus Prime shoots bullets that can easily destroy ice. Chuck as Bumblebee shoots heavy bullets that can destroy the woods easily. Chef pig as Soundwave shoots shockwaves that deal damage in circular areas. You can upgrade them too to increase their damage, defence and auto mode.

You are getting Angry Birds Transformers Unlimited gems here. With unlimited gems, you can instantly repair your transformers, unlock new transformers and upgrade them. You don’t need to collect any more gems in this MOD.

You can download the latest version of this MOD by using the Angry Birds Transformers MOD APK Download button given in this post. Just tap that button, and you will get the direct download link that will start downloading the game.