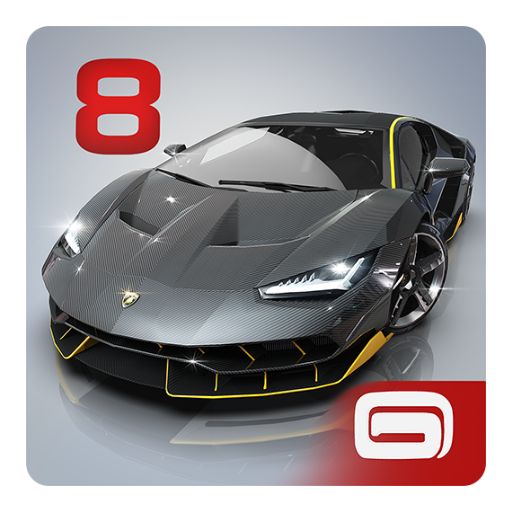 Download Asphalt 8 MOD APK and get Free Shopping. Asphalt 8 is a racing game offered by Gameloft. It has more than a hundred million downloads on the Play Store. Choose from 300+ Superfast cards & bikes, race against the NPCs or the real players, and show them who is the real racing boss here.

In this game, you will go through a series of races in career, events, world series, and other modes. Career mode is its main mode that includes 10 seasons. There are multiple types of races. You can get 5 stars in a race. 3 stars for the first position, 2 stars for the second position, 1 star for the third position. And there are 2 extra objectives you can achieve in the race. You will get 1 star for completing each objective. Stars are needed to unlock the next races in the season, unlock new seasons and game modes. You will also get credits for winning the races. Credits are used to upgrade your car and buy new cars. You can also compete against the real players in world series mode.

Classic races are the simplest type of race. There will be multiple opponents. You have to cross the finish line before them to win the race. No extra rules in these races.

In the versus race, you will race against only one race and that’s your rival. Finish the cross to win the race. It’s pretty much similar to classic races except for the difference in the number of opponents.

An elimination race has 8 racers including you. After a certain amount of time, a countdown of 30 seconds starts. When the time’s out, the racer at the last position will be eliminated from the race and a new countdown will be started right after the elimination. This process repeats until only one racer is left in the race and he will be the winner.

In knockdown races, you will compete against only one racer. There will be multiple cars with a red indicator on them. You have to knock them down. This race has a time limit. The racer with the most knockdowns when time runs out will win the race. Also, there is a maximum knockdown limit. If any racer reaches that limit before the time limit, he will be the winner.

In the infected races, there are 8 racers including you. The racer at the last position will get a timer of 7 seconds. If he remains in the last position, he will be infected. While infected, he will get infinite nitro. Also, a countdown of 30 seconds starts. You can touch the other racers to infect them and gain extra time. When this countdown ends, that racer explodes. After the explosion, his car will be cured and return to normal. Cross the finish line before others to win the race.

In Gate drift races, there are no opponents. It only has a time limit and multiple gates on the racing track. When you cross these gates while drifting, you will get points. You have to earn a certain amount of drifting points before the time runs out to win the race.