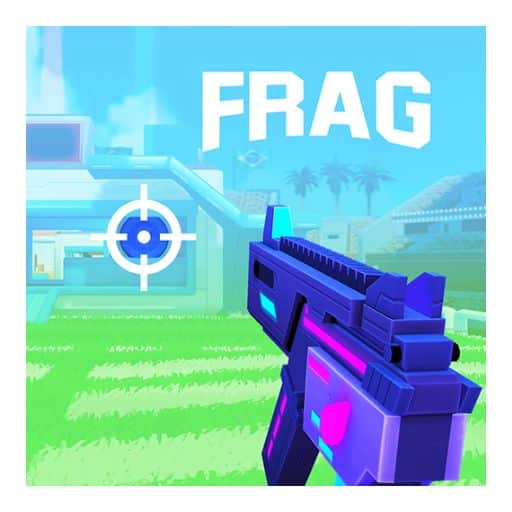 Download FRAG Pro Shooter MOD APK which has many modified features such as unlimited money/ammo/ability, and many more. FRAG Pro Shooter is an action shooting game offered by Oh BiBI. It has more than fifty million downloads on the play store. Unlock over 90 amazing characters, create your own unique team to take down the opponents and their towers with your awesome abilities & FRAG powers.

It’s a shooting game in which you will compete against the real players to destroy the bunkers & tower first. In the game, you will make a team of five characters and enter the arena. In the arena, there are 2 bunkers and 1 tower on both sides. There is one target in each bunker and tower. You have to destroy the opponent’s targets in the bunkers first and then the target in the tower. Who will destroy all the targets or deal more damage will win the match. Your all characters will spawn on your side. You can control any of the characters and the rest will attack automatically depending on their role. If you die, then you can choose any other character to continue and the killed character will respawn after a certain time period.

You can easily master the controls in this game. Drag the left joy side to move the character and aim on the targets to shoot. Your character will shoot automatically when you aim at the target. Or you can double-tap to shoot manually. The ability button is given on the right side of the screen. Tap on the map to view the full map and the damage dealt with the targets. You can tap on the character’s avatar to switch the characters and play with him/her. It supports both FPP & TPP modes. You can change the perspective mode with the button given on the left side of the map.

FRAG Pro Shooter has 91 awesome characters. Characters are divided into 5 roles: Attack, Defence, Camp, Center & Wildcard. Characters, you are not using, will work depending on these roles. Attackers go into the enemy territory and attack the target. Defenders stay in the base and protect the bunkers from enemies. Camp characters also stay and defend the tower. The Center character goes on the bridge in the middle of the base and attacks enemies from there. Wildcard characters are wild and go anywhere in the arena. Each character has a unique ability that you can use in the battle. You can also upgrade your characters to level 10 to unlock their FRAG powers.

Go alone in the arena or with friends. It has many game modes and you will get trophies, chests, XP, and gold in all modes. You can play 1v1, 2v2, street frag, and payload. In 1v1 mode, you will battle against a real player. In 2v2 mode, you will team up with a friend or a random player and battle against 2 players. It allows 6 characters on each side. You and your teammate both have to choose 3-3 characters. In the street frag mode, there is only one bunker on both sides on a small map. Ability cd time and respawn time are reduced too.