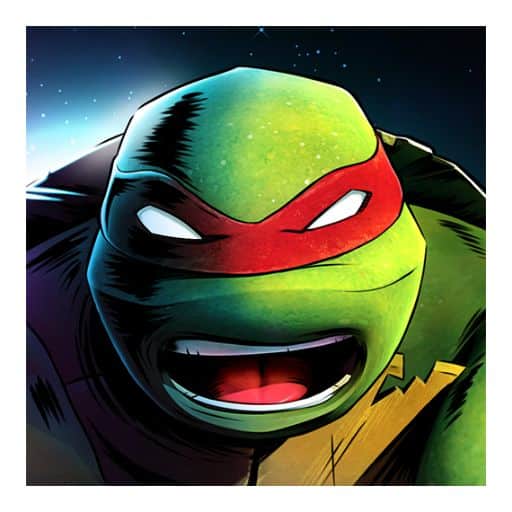 Hey there, from here, you can download Ninja Turtles Legends MOD APK which has unlimited pizzas, money, and bucks. Ninja Turtles: Legends is a role-playing game full of action offered by Ludia Inc. It has more than ten million downloads on the Play Store. Recruit the mutants, create your ultimate team to defeat Kraang, and compete against other players.

The story in TMNT Legends MOD APK starts when Ninja Turtles, Leonardo, Raphael, Donatello & Michelangelo, went to stop some criminals. While fighting, one of the criminals opened a portal to Dimension X. Kraang pulled all Leo’s brothers into the portal. Now Leo must create his ultimate team to fight all the criminals, bosses, defeat Kraang to bring his brothers back, and save the world.

Ninja Turtle Legends MOD APK is a turn-based 5v5 game. You have to create your team of 5 mutants. In the battles, your team will be on the left side and enemies on the right side. You can see a hexagon with an HP bar on every character. Hexagon is filled with a color and a number. The color and number show the mutant class and level respectively. The mutant whose hexagonal ring fills completely will be ready to attack. You can see the attack moves on the bottom right side of the screen. Select the target and then tap the move to use it. Each battle has multiple waves. Clear each wave to complete the level. You will get rewards like mutant DNA, items, mutagen, etc.

There are many game modes you can play and face different challenges in the Ninja Turtles Legends MOD.

It’s the story mode of the game where you will complete many chapters and stages to defeat Kraang and free your brothers. It has two difficulties: Easy and Hard. Both have separate rewards. On completing a chapter, you will get a mutant card pack. Hard mode is a good way to get DNAs.

TMNT Legends MOD has over 80 mutant characters, each with unique skills. Recruit Leonardo, Shredder, Kraang, Bebop, Dr. Rockwell to your team. There are no villains when they are in your team. You can upgrade your mutants & their skills to increase the stats. To upgrade your skills, you need various items. The number of skills a mutant has is equal to the star level of your character. Evolve the mutant to increase the star level and unlock new skills. Mutants are divided into 5 classes: Might, Tech, Spirit, Swift & Cunning.

You are getting Ninja Turtles Legends unlimited money in this MOD. Not only money but bucks & pizzas are also unlimited. You can easily unlock and upgrade all the characters to the max level easily.

“I love everything about this! Over 80 characters? check. Cool Ninja fights? Check. Boss battles? Check. Endless fun? Mega check! Fun for everyone!!”