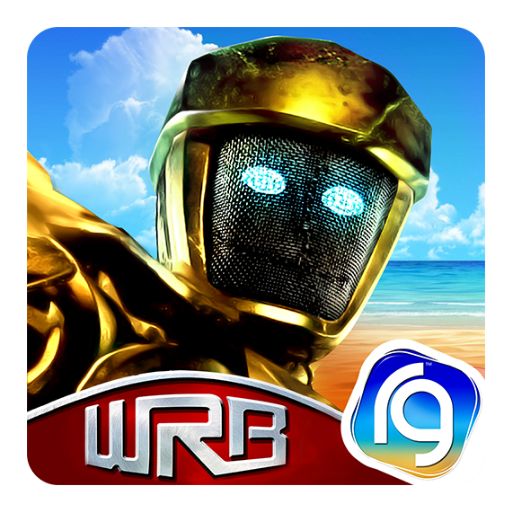 Hey there, from here, you can download Real Steel World Robot Boxing MOD APK which has unlimited money. Real Steel World Robot Boxing is an action-pack robot boxing game offered by Reliance Big Entertainment (UK) Private Limited. It has more than fifty million downloads on the play store. Collect powerful robots, take them into the rings, defeat all the others & win the championship trophy.

If you have watched the movie Real Steel, then you already know what this game’s about. You are new in the boxing world with your robot that no one thinks highly of. You will fight against the robots in the arena, make your way to the top and win the World Robot Boxing championship defeating all the powerful opponents in the Real Steel MOD APK. And you need to upgrade your robots, unlock their abilities & special attacks to match the opponents’ power at a higher level.

Real Steel MOD includes 50+ robots including famous ones such as Atom, Twin Cities & Zeus. Robots are divided into UW1, UW2, WRB1, WRB2, WRB-G, and Superbots categories. Robots of any category are far stronger than the previous ones. All robots have 2 abilities & 3 special attacks. Initially, only one ability & special attack is unlocked.

You can upgrade your robot’s power, HP, and special attack. Upgrade all the stats of the robot to level 3 to unlock second and level 7 to unlock third special attack. Level 7 is the max level of all robots. After that, you can use robot cards to increase their star level up to 5. Upgrade to star 2 to unlock their second ability. In World Robot Boxing MOD APK, abilities are of passive nature and activate automatically.

There are many modes in the Real Steel WRB APK you can play and become the champion in all those modes including multiplayer.

The career in the Real Steel World Robot Boxing MOD APK Latest Version is where it all started, your journey to win the WRB championship in a story mode. In this mode, there are five championships: UW1, UW2, WRB1, WRB2 & WRB-G. Win the current championship to take part in the next championship, taking it to a whole different level. Takedown the opponents in the underworld and then the opponents from all over the world in WRB. There are also other sub-modes like time attack & free sparring. This mode is great for earning silver & gold.

Challenges are a great way to get exclusive robots. In it, there are many challenges. Each challenge has multiple levels and requirements to enter into the level. Clearing a level will reward you with exclusive robot cards. You will fight many robots at each level and need to complete 3 conditions in each battle. Complete all the levels to get all the robot’s cards.

Versus mode is the multiplayer mode of the Real Steel World Robot Boxing MOD APK OBB where you will fight against real players. Fight and win against as many players as you can and move up on the leaderboard. When the event ends, you will get awesome rewards based on your ranking. There are also milestone rewards you will get on achieving a certain score. You can get silver, bots cards, and superbot tokens. You can buy superbots with the superbot token in the shop. Oh and don’t forget to heal your robot before going to another battle. Your robot needs time to heal its HP as it carries the same remaining HP after the battle. So heal first & then fight.

In the Real Steel MOD APK (Unlimited Money and Gold), you are getting unlimited money that lets you buy all the robots from the shop and upgrade them to the max level. You don’t need to spend your time collecting money anymore.