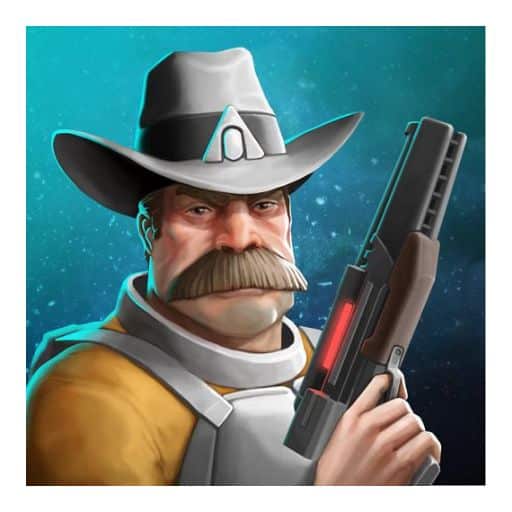 Hey there, from here, you can download Space Marshals MOD APK which has unlimited ammo. Space Marshals is an action-packed shooter game offered by Pixelbite. It has more than a million downloads on the Play Store. Place as a space marshal and capture all the fugitives who escaped from the space prison, The Artemis.

The story is about Burton. He was a space marshal but got suspended and prisoned in the space prison spaceship named The Artemis. A popular criminal, Blackburn is also prisoned in this space prison. One day, some unknown criminals hijack the space prison. They kill all the assigned officers on the ship and free Blackburn. Then they abandon the Artemis. 7 months later, the oxygen level is about to drop to 0. Burton gains his consciousness and meets Tami, the A.I. commander of the correctional facility. It tells him that all charges are dropped and reassigned as the space marshal again as long as he doesn’t do anything out of the law. Tami tells him everything about the hijacking and oxygen level. Then he, Ava, and Gavin evacuate to the nearest planet in the escape pods. From there, they will start their mission to capture all the fugitives and Blackburn.

Space Marshals MOD is a top-down perspective shooter game. You will play as Burton, a space marshal, and go on many missions after the first landing on the nearest planet. In the second mission after crash landing on a planet, you will regroup with your team and go to the camp. There will be many bandits in the area guarding the place. You can kill them with guns or just pass them silently in stealth mode. If you go in their sight, they will start shooting at you. Use your surroundings to take cover. There are boxes, walls, and other obstacles you can use to hide. Read the objective at the top left side and complete it. When you complete a mission without dying and clearing the side missions, you get to choose a reward from the four and include a high-star weapon.

To interact with someone or something, tap the virtual movement stick. Tap anywhere on the screen to stand and crouch. On the bottom left corner, it has 2 buttons of throwables and on the bottom right corner, it has 2 buttons for primary and secondary weapons. It has a mini-map on the top right side. The white arrow is your position, green arrows are your ally’s position, red arrows are enemies and the red skull shows the high-value criminal. Blue circle is your destination.

It includes many amazing weapons. You can use any playstyle with these weapons. Go aggressive with assault rifles or go silently & take down enemies without anyone noticing with crossbows. Takedown a group of enemies with exploding arrows of Knife Boom Crossbow. It also has shotguns & auto-shotguns, SMGs, handguns, frag grenades, flash, proximity mines, ax, flash, and mine, acid bombs, portable dredgers, and many, many more. Use any weapons you want.

This MOD comes with the following features:

Paid Unlocked – Space Marshals is a paid game on the Play Store. But you can play this game for free using the Space Marshals MOD APK Unlocked. You don’t need to pay any money. All weapons are also unlocked in this MOD. You can use any weapon you want from the start.

Unlimited Ammo – You are also getting unlimited ammo so you don’t need to worry about running out of the ammo.