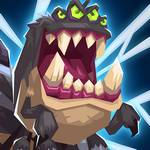 Hey there, from here, you can download Tactical Monsters Rumble Arena MOD APK which has the damage & defense multiplier. Tactical Monsters Rumble Arena is a tactical RPG multiplayer game offered by Newland Canada. It has more than a million downloads on the Play Store. Create your amazing team of mighty heroes, upgrade & make them stronger, battle against the real players from around the world beat them, and become the best tactician.

Tactical Monsters Rumble Arena MOD is a turn-based strategy game. There will be an arena made up of cells. You can deploy your 5 monsters at random cells on the left side of the arena at the starting of the level. In the level, your heroes & enemies will attack in turns which are decided by their initiative attribute. The hero with the highest initiative attribute will have the first turn.

When it’s your hero’s turn, you will see the green highlighted cells on the arena. You can move your hero anywhere in these cells. If an enemy is in your range, then it will be indicated in red color. Tap on an enemy to target it and then select the cell around it to stay after attacking it.

Your hero will get energy points on attacking the enemy, killing the enemy, and being attacked by an enemy. On collecting certain energy points, that hero’s ultimate skill will recharge. There are two more moves you use: Defend or Wait. When you choose to defend, it uses your hero’s turn and that hero will receive 20% less damage.

On waiting, your hero’s turn will be shifted to the end of the current turn set. It will not affect your turn in other sets. Kill all the enemies using tactics to clear the level. You will get gold & hero cards as a reward for clearing the levels.

There are more than 90 heroes in the Tactical Monsters Rumble Arena hack, each with a unique set of skills. Dracula, Nobu, Dr. Walter, Ares, Shady, Wukong, Dragon, Kronos, etc. You will find every type of hero & monster in it. From God of War Ares to Medusa, from Frankenstein to Griffin. Add them to your team and dominate the arena. They are also divided into 2 categories: Ranged & Melee.

Melee heroes can attack the enemies only from one cell away. Ranged heroes can attack the enemies within 5 cells at full damage rate and only 50% damage at the further distance. How many cells any hero can move depends on his mobility attribute. You can level up them to increase their stats and unlock new skills. To level them up, you need to collect a certain number of their cards.

As the damage of ranged heroes is reduced to half when attacking the enemies 5+ cells away, sometimes it’s difficult to take down the opponent’s damage dealer. But don’t worry about that anymore. In this Tactical Monsters MOD APK, you are getting the damage multiplier & defense multiplier. You can enter the number from 1 to 1000. It will increase the damage & defense of your heroes by X times. You will be invincible at 1000x defense. Also, the damage of ranged heroes will not be reduced to half in this MOD no matter how far the targeted enemy is.

How to increase the player level?

To increase the player level, you have to upgrade your heroes. You will earn XP on leveling up the heroes. On acquiring a certain amount of XP, the player’s level will increase.

What features are coming in this MOD APK?

How many game modes are there in the game?

Thank you very much for reading this post. Tactical Monsters Rumble Arena MOD APK comes with amazing MOD features that let you multiply the damage & defense of your heroes up to 1000 times. 90+ unique heroes unlock many possible teams. You can create your own unique team to battle against the real players. You’re gonna have fun playing & dominating the players with this MOD. Believe it. And have a nice day!