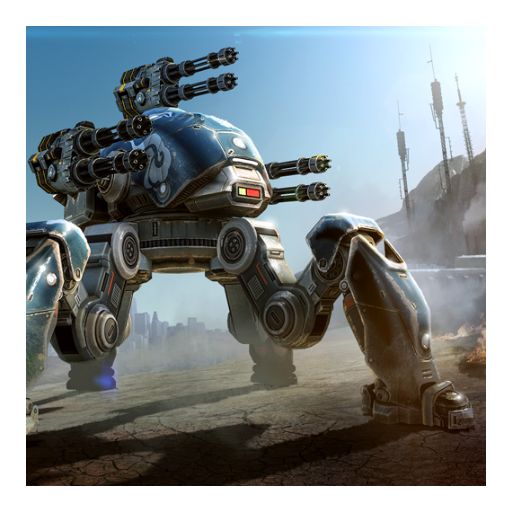 Hey there, from here, you can download War Robots MOD APK and get Unlimited Bullets. War Robots is an action-packed 6v6 multiplayer battle game offered by PIXONIC. It has more than fifty million downloads on the Play Store. Choose your robots, equip them with amazing weapons, capture beacons and destroy opponent’s robots with no mercy.

War Robots MOD is a 6v6 multiplayer robot shooter game. You can take up to 5 robots & 1 titan robot and customize them with various types of weapons. You will be matched with 5 teammates and 6 opponents of the same league. At the starting of the match, both teams will spawn on their side. They can start the match with any of the robots except the titan robot. Move the robots by dragging your thumb on the left side of the screen and use your weapons using the buttons on the right side. There is a red button to use all weapons simultaneously or tap the buttons that are around the red button to use the respective weapon. Destroy the opponents’ robots. If your robot is destroyed, then you get the window to choose another robot to continue the battle. Once all your robots are destroyed, then you no longer fight.

There are five game modes in the War Robots hack. Each game mode’s rules and objectives are as follows:

Domination is 6v6 mode. There are 5 beacons on the map and both teams of 6 players start with the same amount of tickets. You have to capture the beacons. When you capture the beacon, the opponent team’s tickets start to lose over time. The same goes for your team. When any team captures more beacons than the other, the opponent’s tickets lose faster. A team wins the battle when the opponent loses all their tickets or their robots.

Beacon rush is completely the same as the domination mode. Destroy all the robots of your opponent to win the match. Or the team who runs out of tickets first will lose. There is only one difference. And that is when your robot is destroyed and you choose another robot, then you can spawn on any of the beacons captured by your team.

Free For All is a 5-players match. In this mode, there are no beacons. The match lasts for 10 minutes. Your goal is to destroy as many robots as you can. The player who destroys the most robots will win the match. You can also use the same robot multiple times.

In the team deathmatch, there will be two teams of 6 players, no beacons, and a 10-minutes match limit. The team that destroys more robots than the opponent or destroys all robots of the opponent wins.

A quick match has three modes: Domination, Beacon Rush and Team Deathmatch. These modes are the same as explained above. You will be matched in any of these modes randomly.

MOD Menu – It comes with a MOD menu that contains all the MOD features like speed multiplier, jump height, no gravity, etc. You can toggle any feature you want. This MOD game is also known as War Robots MOD Menu APK for this amazing feature.