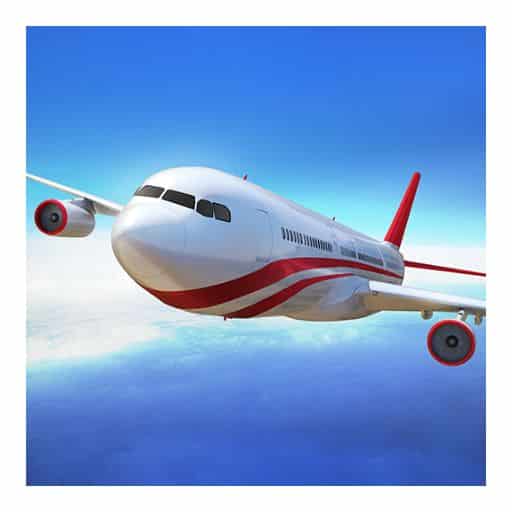 In the Flight Pilot Simulator MOD APK, you will play as a pilot and go on many missions. You will start with the training and learn to take off, turn and land at the airport. For every successful mission, you will get XP. XP is needed to increase your pilot rank from beginner to elite. Complete missions to earn stars, money & tickets. You will fly over many different locations such as mountains, fields, sea, etc. Its 3D graphics & locations are so realistic. You will enjoy it.

Controlling the plane is easy except landing it in the Flight Pilot Simulator 3D Free MOD APK. It has a throttle slider on the right side of the screen. Use it to accelerate & decelerate the plane. There is also one more option to increase the speed of the plane by 1x & 2x. Tilt your mobile up & down to ascend & descent the plane respectively. Tilt left & right to turn left & right. On the bottom left corner, it has radar, brake & landing gear buttons. Tap the brake button during the landing on the base to stop the plane. Tap the landing gears button to open & close the landing wheels of the plane. If these buttons are orange, that means they are activated.

There are many types of planes in the Pilot Simulator 3D MOD APK like single-engine planes, jets, cargos, gliders, passenger planes, military aircraft, etc. Every plane has different attributes such as Max Speed, Handling, Weight & Seats. The number of seats is the number of people you can take with you on the plane. Passenger planes have the highest seat numbers and then cargo planes and are also difficult to land because of their size & weight.

You will go through many types of missions. It has 10 levels: Novice, Apprentice, Intermediate. Advanced, Professional, Master, Senior, Pilot, Elite & Commander. Each level has three missions and one special mission. In special missions, you will require a plane according to the situation like cargo, firefighter plane, etc. You will get tickets for completing the special missions. The next levels will unlock upon completing all missions of the current level.

Free flight is a free-roaming mode in which you can fly planes anywhere you want. You can also take missions in this mode by landing on the airport or aircraft carrier warship. There are 4 types of missions and show on the map in green, purple, orange & red dots. Green dots are for the passengers, purple for delivering packages, orange for rescue missions, and red for emergency missions. You will get money on completing these missions and are different from the level’s missions.

Unlimited Coins: In this Mod, you will get Flight Pilot Simulator unlimited coins. Hence, you can enjoy this game brilliantly now. With unlimited coins and money, players can buy anything and save time.

Flight Pilot Simulator 3D MOD APK All Planes Unlocked is another best feature of this MOD. With all planes unlocked, you can fly any plane you want.

In this game Flight Pilot Simulator 3D MOD APK Latest Version, players can enjoy unlimited coins + unlocked all planes features for free. If you like this game, you can download the working mod and latest version here.