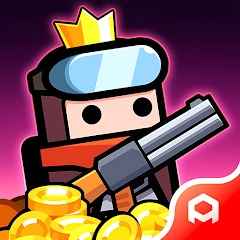 Download Survivor.io MOD APK which has the defense multiplier, XP boost multiplier, no reload, high rate fire, and many other amazing features. Surviving through the horde of zombies is not a hard job with this MOD. These MOD features will help you in defeating not only hundreds but also thousands of zombies with ease.

Exterminate all the zombies surrounding you. Explode them using missiles, blow them apart using shotguns, burn them using Molotov, blow their heads off using bricks, or turn them into ash using lightning. And if they overwhelm you, toggle the High Rate Fire, No Reload & Unlimited Ammo features of Survivor.io MOD and turn the situation around in a few seconds.

Survivor.io is a casual adventure game offered by Happy. It has more than five million downloads on the Play Store with a 4.7 rating out of 5 and is also the #1 top free adventure game. This game put you in the middle of the city surrounded & attacked by thousands of zombies that will easily outnumber you. What do you have to survive in those situations? Well, countless weapons and skills are at your disposal. Use them however you want.

The gameplay is so simple of this game. There are zombies everywhere and they will try to attack you too. You just need to avoid them and kill them. You will see the situation from the top-down perspective and control & move your character by dragging your finger on the screen. Your character will automatically attack the zombies and also use their skills.

Some zombies on dying will leave behind green crystals called fuel. You need to keep up those fuel crystals to increase your in-stage level. Upon leveling up, you can choose one out of three weapons & skills and their upgrades. You can carry up to 6 weapons and 6 skills and use them simultaneously. It creates countless combos of weapons & skills. So, you can try new combos with each gameplay.

A chapter lasts 15 minutes and has 3 bosses that appear after every 5 minutes one by one. To clear the chapter, you will have to kill all three bosses. You will get a boss assault warning 5 seconds before the boss spawns. You can also use these 5 seconds to your advantage. The boss always spawns near you and it will also kill all nearby zombies in an instant.

So, you can position yourself near the bomb or meat and also attract lots of zombies near you. That way, all the zombies will be killed and you will get lots of fuel crystals for leveling up. And then you can use the bomb to deal massive damage to the boss.

The lucky train is a great source of getting weapons & skills upgrades. Depending on your luck, you have the chance of getting from one to six upgrades of the weapons you are using. It will not contain any weapon or skill that you don’t have in your build so that it doesn’t interrupt your weapon build by any random unpossessed weapon.

Now and then, a giant zombie will spawn in the city. You will get the chest every time on killing it. Just pick up the chest and you will enter the lucky train. Killing the zombie boss will also reward you with a lucky train chest and has a 100% chance of granting multiple upgrades.

Survivor.io MOD APK is full of amazing mod features. You can toggle them via the MOD menu whenever you wish. Here, we have given detailed info on all its mod features.

Using the defense multiplier, you can increase the defense of your character up to 100 times. With that much defense, all the damages against you will not cause any HP loss. You will be invincible with max defense.

Increasing player level is one of the hardest things in this game. So, we have added an XP Boost multiplier with a max 100 input value. With its help, it’s very to level up. And then you can evolve your character with ease.

Each time your character fires his weapon, he takes time to reload it and fire again. This reloading time is high for shotgun and revolver-like weapons. But you can activate the No Reload feature to remove that process. So, your character will keep firing without reloading the weapon. There will be no need for reloading.

How many mod features are included in this MOD APK?

How many game modes does this game have?

It has mainly two game modes – Story Mode and Trials.

Survivor.io is a very enjoyable game even with its simple design & gameplay. 50+ types of weapons, skills, and their countless combos keep the game interesting and you will not be bored no matter how many hours you play the game. You may be overwhelmed by zombies numerous times, but that, too, will be fun.

Player leveling up, overpowered bosses at higher stages, biofuel shortage, and weapon reloading time are the problems every player faces in the official game. But with the help of defense & XP multiplier, instant reload, and the enemy always drops biofuel features, you can easily overcome those problems in this MOD. So, download the Surivor.io MOD APK now and enjoy.