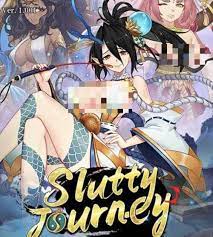 Note: Use Bypass APK for the tutorial

The story started a thousand years ago in the Goldy Heavens where goddesses, deities & maidens live. Two maidens, Su Wukong and Goddess Sandalwood took the task to retrieve the Holy Scripture from the west and they successfully did it. Then the authority of Goldy Heavens allowed them to live there.

But Sun Wukong is a needy maiden who can’t resist her lustful desires. To fulfill her needs, she sucked the life force of many men by drinking their seminal fluid. And she was not alone. Other evil maidens too did that with her. This incident caused havoc in heaven & human world. To stop this disaster, the celestial troops took action and fought the evil maidens. And in the end, they caught them and exiled them to the Lost Border.

Lost Border is like a desert for Sun Wukong and other evil maidens. Why? Because there is no man to quench their lustful thirst. A thousand years passed by and they are still living in torment. Their power is also gradually decreasing since then. And they can’t leave that place because they are so weak and celestial guards are guarding Heaven’s & Human world’ gates.

Starting of Your Adventure

I don’t know how someone can get lost and reach the Lost Border. And with that, his adventure starts. I’m talking about you, pal. Yeah. You get lost and reach the Last Border somehow. There, two evil maidens, Silver Horn and Golden Horn find you and start their fun part with your huge & hard hammer until it went soft (if you know what I mean).

Soon after that, Su Wukong reaches the scene and shoos away those two maidens. Then she gets on top of you and has fun for 7 days and 7 nights. After 7 days, she recovers all her power and plans to go to the human world again. From here onwards, your adventure starts in which you will help Su Wukong and other maidens reach Human World again.

There are more than 50 maidens in this game. Each one of them has a beautiful and attractive body with different measurements. You can also increase their measurements by promoting them. The promotion will require specific materials & gold coins. If you want to see them without clothes, you can evolve them using the fragments. Evolution also increases their skill level and max level capacity.

All the maidens are also divided into four classes – Fire, Water, Wind, and Earth. A maiden can deal more or less damage to the enemy depending on their class. Here’s a cycle to show their relation – Fire ➡ Wind ➡ Earth ➡ Water ➡ Fire. Fire-class maiden will deal more damage to a wind-class enemy, but less damage to the water-class enemy. To make your maiden stronger, you can level them up. Leveling up increases their attributes such as Attack, HP & Defense.

This game has a MOD Menu that includes all these MOD features as toggleable options. You can activate and deactivate whichever feature you want and whenever you want via this MOD Menu. To open this menu, just tap on the floating icon shown at the top left corner of the screen.

Gems are the premium in-game currency and coins are the primary currency. With coins, you can summon maidens and buy items in the shop. And using the gems, you can buy coins, high-level summons, nuts, and replenish AP. But the rate of getting gems is very low. Therefore, we are providing unlimited gems & coins in this MOD. You won’t have to care about the gems & coins ever. Just use them however you want.

If your maidens’ levels are not high enough, enemies can easily kill them at higher levels, and you will lose the match. To overcome this situation, we have added God Mode. When it’s activated, no matter how much HP your maiden has or how much damage she receives, she will not lose a single HP. Then you can easily win the match.

This mod feature increases the chances of critical hits by a great number. Whenever a maiden strikes the enemy with a critical hit, she deals many times the original damage. That’s why critical hits are amazing. And this feature will help you by increasing their hit chance.

When you activate this feature, it will increase the critical damage by 25 times the original critical damage. Killing an enemy with its help will only take a few seconds.

What do I need to evolve a maiden?

You will need fragments. To collect fragments, you can summon maidens or complete missions & events.

You are getting God Mode, high critical rate & damage features.